December 9, 2015 — (This article includes some translation for people under fifty.)  We are weeks away from Christmas. We’ve been assaulted by hip-hop, funky holiday music since about the Fourth of July, and I sometimes hear

pounding in my head that sounds much like “The Little Drummer Boy.”

The perfect venue for me would be called “Your Parent’s Christmas Albums.”  I’m stuck in the sixties, awash with Ray Conniff and Percy Faith, and all those Rat-packers like Frank (Happy 100th), Sammy, Dino.  I like to hear Perry Como and Bing Crosby and Ella Fitzgerald.  I’ve even started liking the odd combination of Bing Crosby and David Bowie “Peace on Earth, The Little Drummer Boy.”

Officially called a curmudgeon by a friend last week, I’m waxing and waning over times past when we listened to music from an album (a vinyl disc placed flat on a) turntable (a revolving, circular plate that holds an album which is it played on) a stereo system (an electronic appliance where two or more microphones feed speakers to give a fuller sound).

In our basement a 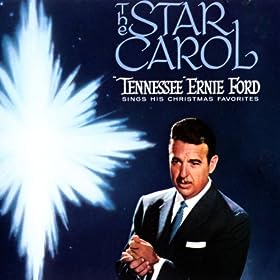 re the remnants of Christmas past, albums from both our families of origin that stood the test of time.  My husband’s family enjoyed Tennessee Ernie Ford’s “Star Carol” and my family’s favorite was “Merry Christmas” with Johnny Mathis.  I am certain I’ve owned the Johnny Mathis disc in every form, album, 8-track, cassette, CD, and I’m sure my husband and/or son have it on I-Tunes.

My Beloved and I  both  enjoyed and still enjoy albums which had eccentric artists from different types of music, such as the Firestone Christmas album with Julie Andrews and Andre Previn.

I remember getting a Christmas record from the REMC (Rural Electric Membership Cooperative) that had “Ring-Ring-Ring-Ring REMC, Ringing Everyone a Merry Christmas” and playing it over and over until I thought my mom’s head would blow off.  Amazingly, You Tube has it on on audio.  The You Tube notes mentioned that it was a 45 PRM (translated for millennials, a vinyl disc that circles at the speed of 45 revolutions per minute) as opposed to albums, (which spun at 33 revolutions per minute) distributed in 1964 and reissued in 1967.

“Indiana Rural Electric Membership Corporations 45-rpm Gift Record from 1964 (reissued in 1967). Tells the story of Randy and Ellen and their parents and the wonders of the REMC power lines “ringing everyone a Merry Christmas.”

When I was growing up, we distinguished between carols and songs.  Carols were hymns or religous in nature; songs were secular.  Christmas is, indeed, a Christian holiday and I am distressed when Christian songs are dumbed down.  A current television commercial features a gorgeous “Let Their Be Peace on Earth,” but has removed the word “God.”  I don’t understand; listen to this magnificent version from the Harlem Boy’s Choir with God in it.

As a young child, I played the piano.  I was not skilled, but kept the ability to play Christmas songs and carols until probably ten years ago. Now our piano sits idle, collecting dust and graduation photos.  The gift it gave me will last forever.  Like my late mother, I love Christmas music and can remember the words to most songs.

My husband and I — both growing up in the sixties — surprisingly choose the same holiday favorite.  It is based on a poem by Henry Wadsworth Longfellow.  Longfellow’s son Charles was seriously injured in the Civil War and came back to Massachusetts to recuperate.  Longfellow lost his wife in a tragic house fire and it was not a good time in his life.  Yet he could still see the beauty of and the message in Christmas.

Merry Christmas.  And enjoy Sinatra (this one’s for you, MD).

Then pealed the bells more loud and deep

God is not dead nor doubt He sleeps

The wrong shall fail the right prevail

With peace on earth goodwill to men